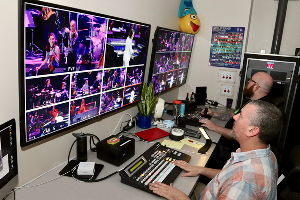 The 2018 season at the Wolf Trap Foundation for the Performing Arts (Vienna, VA) has seen the culmination of a multi-year plan to bring IMAG capabilities to its major performance venue, the Filene Center. This summer hundreds of thousands of visitors to Wolf Trap, one of the country’s premier arts organizations, will enjoy an enhanced audience perspective on performances captured by multiple Panasonic integrated pan/tilt/zoom cameras, including the ultra-rugged AW-HR140 outdoor unit.

Wolf Trap is located on 117 acres of national park land near the town of Vienna , VA. The Filene Center accommodates 7,000+ patrons seated both under cover and on the expansive lawn in a more casual style. Performances are given nightly from May to early September and encompass a wide range of styles from classical orchestras and ballet to rock and pop and everything in-between.

Ryan Haderlie, Assistant Director of Concert Production and Operations for the Wolf Trap Foundation, explained that the installation of five large-screen displays, creation of a totally new camera production system, and the venue’s first digital control room were implemented with the hands-on involvement of top management committed to an improved customer experience for Filene Center audiences. The lawn seat audience is served by a center 11’ x 19.7’ screen and two flanking 7.4’ x 13’ screens, while inside the Filene Center, the balcony and loge audiences are served by two 7.4’ x 13’ screens.

The Wolf Trap Foundation partnered with system integrator Avitecture, Inc. (Sterling, VA) on the project. Avitecture has been involved in the development of this project for two years, conducting careful analysis and research to identify the most effective equipment to support the innovative design. The significant AV infrastructure requirements for the system were closely coordinated by Avitecture to insure a smooth installation just prior to Wolf Trap’s 2018 season.

The chief components of the live production system are:

balcony. Each HR140 can be powered via IP, and so requires no additional power supplies nor AC outlets near the camera locations;

There are custom patch panels located at the back of the stage and in other areas where the HE130 stage cameras and, potentially, additional cameras can be connected to the HS450.  (Many touring productions bring their own camera operators with their own studio cameras; they can now plug these additional inputs into the system and make use of the entire combination of the robotic PTZ house system with their own manned cameras.)

Bill Apter, Special Projects, Avitecture, noted, “We organized a demonstration of the Panasonic cameras, and together with Ryan determined that these models, particularly the HR140s, were functionally appropriate for the project, as well as technically innovative.

“Then newly available, the HR140 was the only camera on the market that could deliver broadcast quality and withstand being exposed to the elements in the Filene Center’s open-air amphitheater, with no extra weather-proof domes required.”

“Wolf Trap wasn’t very far into its season before the HR140’s ability to capture images with vibration compensation was called upon, as well as the wiper on its water-resistant case that eliminates mist on the lens,” Apter continued.  “Also, the camera’s flexible power options including high-end PoE++ (Power over Ethernet) simplified infrastructure issues for us.”

Wolf Trap’s Haderlie said, “This suite of Panasonic robotic cameras thoroughly addresses our requirement for minimal support in terms of operation. We were impressed with the specs, especially the HR140’s all-season functionality.”

He added, “Right at the outset, we encountered sophisticated demands from our national touring companies with, for instance, our opening night production, The Washington Ballet’s Giselle, calling for an additional two manned cameras on sticks and subsequent routing adjustments. We really ran the new production system through its paces, and everything turned out very well.”

“The PTZs are giving us a lot of versatility in shots, with crystal clear images perfectly co-existing with our large-screen displays. Also, the stabilization in the HR140s has been paramount in giving us good, vibration-free shots.

“The Panasonic production system has been an invaluable element in meeting the overall objective of enhancing our patrons’ Wolf Trap experience.”

Both Haderlie and Apter cited a high-level of support from Panasonic in terms of engineering and training, with on-site personnel covering such operational nuances as memory presets, memorized PTZ traces, setting effective color temperatures for the system in conjunction with the lighting director, and how to use the built-in NDI filters to manage high output lighting or sunlight situations while retaining sharpness and detail in iris control.